The Goddess Has No Clothes 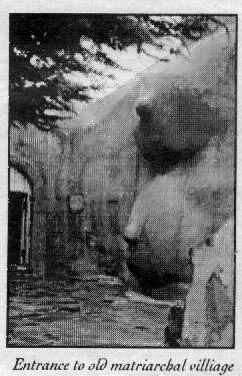 One of the fastest-growing new religions today is a neopagan tradition termed "Goddess spirituality." It is especially popular among New Age disciples and radical feminists but its teachings are accepted at least in part by a large segment of society. The Goddess whispers a seductive tale of a golden age in a distant past. A paradise supposedly existed in Europe and probably elsewhere during the Neolithic era (fans of the Goddess greatly prefer that dignified-sounding term to the more comprehensible "New Stone Age"). Supposedly, there was little or no conflict, little or no social hierarchy, and most especially, no gender discrimination or sexual inequality. The reason these Goddess societies were such paradises, we are told, was because they were "gynocentric" (woman-centered), perhaps even actually "matriarchal." Indeed, the U.N. Fourth Conference on Women in Beijing in 1995 featured a full-size "reconstruction" of a supposed "ancient matriarchal village," complete with a giant pair of female breasts, one above the other, to guard the entrance.

The only problem with this tidy picture is that it is totally unsupported by sound scholarship, rejected by virtually all professional scholars whose field of expertise lies within the Goddess’s claims. With few exceptions, however, these scholars are reluctant to speak out too forcefully against Goddess misinformation, for fear of being branded "anti-feminist." Consequently, the Goddess claims have seldom been critically examined. With Goddess Unmasked, we now have a book which brings together the best refutation of rampant Goddess nonsense, authored by a professor of religious studies at the University of Prince Edward Island in Canada. Davis observes that "we do not possess a single translated text" from any of these supposed major Goddess cultures, leaving anyone who is so inclined free to attribute to those vanished societies whatever social arrangements they are most eager to promote in our own.

Indeed, a cynic might suggest that the Goddess can only reign supreme over societies in which no one can read or write. (But some movements are so irrational that they are impossible to satirize. Neurosurgeon Dr. Leonard Shlain suggests exactly that in The Alphabet vs. The Goddess: when logical left-brained patriarchs invented writing, it doomed the intuitive, right-brained Goddess cultures!)

Today Goddess misinformation has entered the curriculum in far more places than most people realize. The Goddess actively promotes "alternative medicine," especially in schools of nursing. Davis quotes from one prominent neopagan book: "Women have always been healers, and the knowledge of healing - of aura work, colors, herbs and homeopathy, reflexology, midwifery, massage, crystals, and trance states - have always been part of the goddess’ mysteries." The Goddess misrepresents the history of religion, depicting it as a struggle between warm and nurturing female-oriented religions and exploitative, death-dealing male-dominated ones; conventional scholarship knows nothing of this supposed struggle, or indeed of those categories of religions. (The Goddess Kali, worshipped widely in India, demanded human sacrifice. She ruled over a society in which a person’s caste was fixed at birth, and widows were burned on their husband’s funeral pyre. The Goddess writers, notes Davis, present their evidence highly selectively.) Indeed, the Goddess misrepresents the entire history of civilization, portraying it as a struggle between early utopian, female-dominated societies, and later violent, hierarchical and patriarchal ones; professional historians dispute that there ever was a "matriarchal" or "woman-centered" stage of civilization.

Perhaps most seductively of all, the Goddess misrepresents her own history, claiming to be the heir of an unbroken line of covert pagans and druids who secretly preserved the Goddess’ occult healing ways since remote antiquity despite Christian persecution. Davis convincingly traces the origin of the contemporary Goddess movement not to classical antiquity but to 19th-century French and German Romanticism. "Nothing about the Goddess myth correlates with what we know of the ancient civilizations which her devotees claim as their foremothers; everything, however, has clearly identifiable roots in the modern subcultures which began with Romanticism and the nineteenth-century occult revival." In Romanticism, "the supreme importance of feelings, and the purity of the primitive," were emphasized.

"The prized Romantic values of emotion, intuition, affinity with nature, and boundless love coincided with the qualities which traditional stereotypes had already assigned to women."

In his version of Faust, Goethe wrote of mysterious, otherwise-unknown beings called "The Mothers," whose power Mephistopheles acknowledged to be far greater than his own. Goethe concluded that work with his enigmatic and famous line, "The Eternal Feminine draws us on high." Works by utopian social reformers like the Count of Saint-Simon, Charles Fourier, Auguste Comte, Jules Michelet, Alphonse Constant, and others, enormously influential in their day, promoted a viewpoint Davis describes as "the Romantic idealization of women as spiritually pure channels of love, intuitively connected to nature." These utopians, who sought not merely to improve society but to create a literal paradise on earth, suggested that the key to re-establishing Eden lay in the redemptive powers of woman as messiah. Indeed, one French Saint-Simonist group proclaimed in 1832 the immanent appearance of a female messiah, and symbolically kept an empty chair for her to preside over their meetings . When she failed to appear in France, a vision showed her appearing in Constantinople in 1833, resulting in an expedition to search for her there; she was never found.

After the utopians’ hopes for an earthly paradise were dashed by the failure of Europe’s revolutions of 1848, Alphonse Constant took to dabbling in the Kabbalah, and began calling himself "Eliphas Lévi." He played a major role in the 19th-century occult revival, while still promoting ideas of earthly salvation through the feminine. Direct lines from his writings and from his disciples can be drawn to subsequent Rosicrucianism, Theosophy, and most significantly the Hermetic Order of the Golden Dawn, which gave us Aleister Crowley, from whom it is only a short step (via Gerald B. Gardner) to the contemporary feminist neopagan practices of Miriam "Starhawk" Simos, Zsuzsanna Budapest, and Margot Adler.

Late in the nineteenth century, works by J. J. Bachofen and Friedrich Engels claimed to discern, in the dim mists of prehistory, a supposed "matriarchal" stage of civilization. Today’s historians and anthropologists uniformly reject these century-old speculations (as did most historians even at the time they were written!). However, they have had and continue to have wide followings, owing largely to popularization by writers like Robert Graves, Lewis Henry Morgan, Jane Ellen Harrison (who later repudiated "ancient matriarchies" - a fact, Davis reminds us, that Goddess writers never mention), with indirect support from Sir James Frazer, the ubiquitous Carl Jung and his "archetypes," and Joseph Campbell.

Davis has shown conclusively that the Goddess traditions are passed down not from ancient pagan teachers, but from latter-day ones with names like Eliphas Lévi, Aleister Crowley, Margaret Murray, and Gerald B. Gardner.

While this does not invalidate New Age neopagan practices as religion - all religious practices were new at some time - it certainly explodes one of their proudest claims: that the followers of wicca (mistranslated by Gardner as "the wise") have been secretly worshipping "the Goddess" for millennia, and have preserved her supposed ancient wisdom and healing secrets, which are now widely touted as "alternative medicine."

In 1967 a new abridged English translation of Bachofen’s Mother Right appeared. The American librarian Elizabeth Gould Davis seized onto it and in 1971 published The First Sex. This sensationalist book not only promotes "ancient matriarchies," but claims that women evolved before men did, by which time women had already invented everything useful! (She asserts that "the first males were mutants, freaks produced by some damage to the genes." Robert Graves urged that the book be studied in all schools.) The art historian Merlin Stone, drawing largely upon the 20th century imaginings of Margaret Murray and Robert Graves, published in 1976 an equally unscholarly work titled The Paradise Papers, later republished as When God Was a Woman. It painted many ancient societies, prominently among them Egypt, as matriarchal paradises. She suggested that the ancient Hebrew priests must have been Indo-Europeans, not Semites, because they were so patriarchal, and found it "ironic" that Aryan Nazis would end up exterminating equally Aryan Jews. She also attempted to link Hitler’s teachings to the ancient Hittites largely because of the similarities of the names, suggesting that his atrocities had been inspired by archaeological findings about these allegedly brutal, patriarchal ancient peoples. The modern Goddess movement was now in full steam.

In 1987 Riane Eisler published her highly-influential The Chalice and the Blade. She planted her supposed prepatriarchal paradise firmly in Crete, basing her research on the two previously-mentioned books, on Afrocentric texts claiming that the Greeks stole their knowledge from supposedly black Egyptians, and an assortment of odd sources like Frijtof Capra’s The Tao of Physics. The late archaeologist Marija Gimbutas, perhaps the only Goddess writer with proper professional credentials, followed upon Eisler’s success with several impressive-looking, beautifully-illustrated Goddess books, and quickly became the leader of the movement. When asked in a 1989 interview how could she know whether she had gone "too far" in drawing conclusions about her supposed Goddess paradise, Gimbutas replied, "this has to do with your intuition and experience. Just like an art creation you must feel that you are right in what you are saying."

As not only a scholar of religion but evidently a practicing Christian, Davis expresses serious concerns about the stealthy encroachment of neopagan ‘Goddess theology’ into traditional religious institutions. Indeed, at times he is clearly envious of the upstart creed’s remarkable growth during a time when mainstream religious denominations have largely been in decline. Many of his readers will not share these concerns. To many skeptics, ideas of spirituality grounded in "the Goddess" are neither less nor more valid than comparable ideas grounded in conventional theology. But when the Goddess followers promote claims that are factually incorrect - and especially when such falsehoods enter the curriculum, unchallenged - the skeptic feels it necessary to move into action. This becomes especially urgent when we see that many Goddess writers display not merely poor scholarship, but a flagrant disregard for truth. Davis comments on the Goddess writers’ special fondness for quoting the French feminist Monique Wittig’s advice concerning alleged ancient matriarchies: "Make an effort to remember. Or, failing that, invent."

One of the eye-openers in Goddess Unmasked is Davis’ observation that "after the long struggle to free higher education from church control, the doctrines of a new religion are being packaged and promoted as factual material for use in publicly funded and accredited institutions." Secularists, ever vigilant in keeping creationism out of public education, slept as equally-unfounded neopagan doctrines slipped in completely without objection. Fortunately, Goddess Unmasked contains a rich lode of information detailing the errors of fact that are being promoted in the Goddess’ name. It is this information that makes the book invaluable to anyone who cares about the truth - and especially to those determined to keep the teachings of all religious sects out of publicly-supported schools.