Martin Kottmeyer's article The Saucer Error explains how the very idea of a "flying saucer" is based upon a misunderstanding of what Arnold said he saw. But since people thought that Arnold had said he'd seen a saucer, then by golly, saucers were what they reported seeing! (Article excerpted from The REALL News, Volume 1 No. 4.) 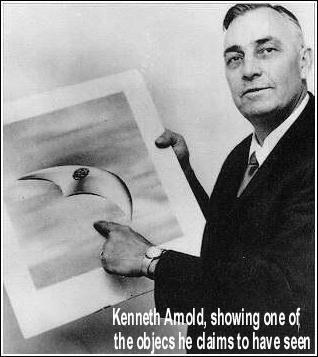 James Easton was the first to suggest that what Arnold actually saw was a flock of American White Pelicans, the largest birds in North America.  The object depicted above does look somewhat bird-like. But many UFOlogists mocked that conclusion, calling it "Pelicanism."

An amazingly long and detailed investigation, The Singular Adventure of Mr. Kenneth Arnold (147 pages), by the Scottish UFOlogist Martin Shough - everything you ever wanted to know about the Arnold sighting. He concludes that the objects Arnold described could not have been birds or other prosaic objects, but does not suggest what he thinks they were.

Some of Arnold's statements made the objects sound very much like a flock of birds:

In these interviews with reporter Bob Pratt, Arnold gives us good reason to doubt his credibility. He talks about "mystery submarines," says that his phone line has been tapped, that UFOs may be alive, and they seem to be able to read his mind. He  says he has spotted UFOs "seven or eight times."

Latest updates on the case in this entry on BadUFOs.com .

Go to The Debunker's Domain